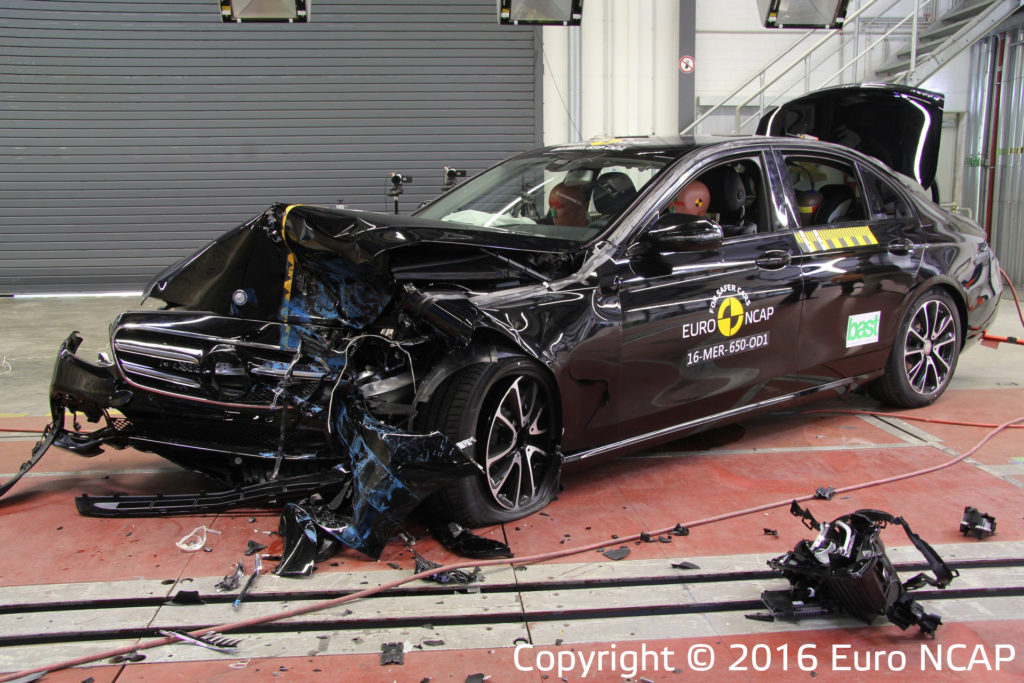 Safety experts at Thatcham Research have welcomed the addition of two more Euro NCAP five star performers, the Peugeot 3008 and Mercedes E Class. However, with much of the latest advanced technology costing extra, safety still comes at a price.

One of two five star rated cars from Euro NCAP this month, the Mercedes E-Class provides a glimpse of the future, with an array of safety technology combining lane guidance and distance control systems to lay the foundations for an autonomous future.

‘Drive Pilot’ is Mercedes’ Assisted Driving system, enabling short periods of hands free driving as long as driver interventions continuously prove that they are still in the loop. If no input from the driver is detected the assisted driving functionality will shut down safely, forcing the driver to take back full control.

Active Lane Keep Assist was also singled out for praise – the system continually provides feedback to the driver when lane markings are crossed, but importantly will actively intervene to steer out of the way when oncoming traffic is detected – potentially avoiding a life threatening head on collision. Autonomous Emergency Braking is included as standard, however the majority of other safety features are only available as optional extras.

“The E-Class is head and shoulders above the competition when it comes to advanced safety features. However, we know that the take up of optional safety features is typically less than 10%, so more needs to be done in terms of standard fitment to make these superb technologies more widely accessible,” said Director of Research Matthew Avery.

As good as the latest results from Euro NCAP may be, they also serve to further highlight the current gulf in safety standards in different parts of the world, as recent safety test results from Global NCAP in India and Latin America have brought the issue into sharp focus.

India’s ‘car of the year’, the Renault Kwid, continues to be offered without any airbags on the standard version, scoring zero stars for adult occupant protection as a result. The same was true of the Honda Mobilio, which also scored no stars. Tests carried out in Latin America revealed that the Chevrolet Spark GT fared no better, with zero stars for adult or child protection.

When Euro NCAP began safety testing in 1997, most cars had a driver airbag and by the early 2000s many including the Renault Megane had up to 6 fitted as standard. Thatcham Research has been working with insurers and other industry bodies for many years to make cars safer and believes that safety should not come with a price tag.

For Peter Shaw, Chief Executive, Thatcham Research, the equation is simple: “Airbags save lives by making vehicles safer and it simply is not acceptable that cars sold at very similar price points in different countries bring varying levels of safety – or more worryingly, no safety at all,” he said.

Speaking about the results in India, Secretary-General of Global NCAP, David Ward said, “Renault and Honda make safe cars in other markets; they have the know-how to make all their Indian cars much safer. We expect them to start doing so now.”