NEWS: Motorists urged to get the best price for scrap cars 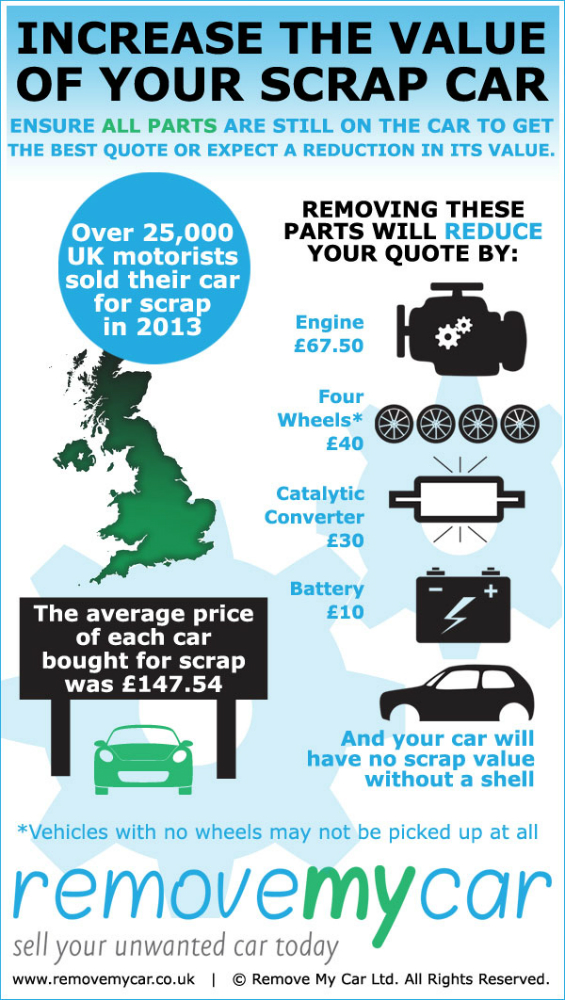 Over 25,000 UK motorists sold their car for scrap in 2013, receiving an average of £147.54 each, according to exclusive figures revealed by vehicle removal specialist Remove My Car.

The company, which works with a network of Authorised Treatment Facilities (ATFs) throughout the UK, has experienced a fall in the national average for scrap car prices over the past 12 months compared to the previous 12 months. In light of this, the scrap metal expert is revealing top industry tactics that will help motorists get a higher price for their end-of-life vehicles.

One of the most important things to do when getting your car scrapped, according to Remove My Car, is to ensure all of the parts are still on the car. Motorists who remove wheels prior to obtaining a quote will be faced with having £10 knocked off the final figure for each wheel that is missing and risk not having the car collected at all, due to a different recovery vehicle required to collect a car without wheels. Most scrap car companies will even refuse to pick up a vehicle that hasn’t got its wheels as the transport of it will be made that much more difficult.

End-of-life vehicles missing an engine will fetch £67.50 less than those with the engine still intact, which is almost half of the average value. Removing a catalytic converter will see £30 taken off an average quote. Furthermore, a car without its battery will fetch £10 less and if the shell is missing the car has no scrap value at all.

Remove My Car has revealed that it has been known for some scrap car dealerships to reduce the value of their quotes towards the end of the month as a way of managing their workload, with many dealers being fully booked or close to fully booked due to road tax expiring. A way of preventing themselves from over-committing to customers is to reduce their competitiveness at this stage, so motorists who do their research early in the month when the dealers may be offering competitive prices are likely to receive a higher quote.

Another handy tip from Remove My Car is to remove the tax disc from the car and send it to the DVLA for a refund, though it’s better to do this before the end of a month, otherwise the next month will not be included in the refund. Avoid a dealer that claims their value includes the tax disc, as this is simply not the case as tax discs have their own value.

As a consequence of the recent cash ban introduced late last year, car breakers as well as scrap metal dealers are now required by law to obtain a copy of photograph identification and a recent utility bill less than three months old from the car seller, when collecting a car for scrap.

Steve Queen, owner of Remove My Car, is keen to educate motorists about the scrap car process to ensure that they always receive the very best, honest, fair price for their end of life vehicle. “What we’re trying to get across is that it’s so easy for you to get extra money for your end-of-life vehicle, you just need to be made aware of how it’s possible. We don’t want to short-change our customers because not only is it unethical it also means they probably wouldn’t use us again.”