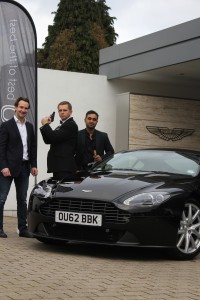 HE WAS already shaken and stirred to find out he’d won an Aston Martin. But junior doctor Sohail Ahmed had a double surprise when he was given the keys by 007 himself – well, Daniel Craig look-a-like Max Ryder.

Sohail won the V8 Vantage after playing a competition with supercar company Best of the Best and picked up the car just hours before the latest Bond blockbuster Skyfall opened at cinemas across the UK.

Best of the Best has become a familiar fixture in airports and shopping centres all over the UK and has given away prestige cars worth more than £14 million in the last 12 years.

Company chief, William Hindmarch, who makes the call to each of the company’s winners, said Bond himself would have been proud of Sohail’s choice.

“Aston Martin recently topped our poll of most popular cars and it’s no wonder thanks to the lifelong association it has with James Bond.

“With Skyfall out this week it’s really special to be handing over the keys to an Aston Martin and we’re delighted for Sohail and his family.”

Sohail said he was speechless at the win.

“It’s beyond words. I never thought I would win. The Aston Martin is such an incredible car and I can’t believe it’s mine.”