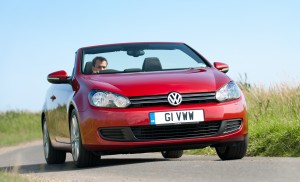 I WAS nine years old when the first Golf Cabriolet hit our British shores. It was April 1980 to be precise. Even at that tender age the image of the VW rag-top appealed to me.

The model remained unchanged until 1993’s Mk III Golf hatchback came onto the scene. This sparked a completely new Cabriolet, replacing the 13-year-old Mk I based version. It was revised again in 1998 when the soft-top took design characteristics from the Golf Mk IV hatchback. 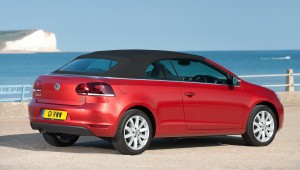 Sadly, in July 2002, time was called on the German convertible, and that was the end of a motoring icon…..or so many petrol-heads thought. But, with the increasing desire for open-top motoring in Europe, VW couldn’t keep the Golf Cabrio alive through memory and second hand car dealerships alone. No, it had to breathe new life into a fresh model. That’s why in 2011 the Golf Cabriolet Mk VI was unveiled at the Geneva Motor Show. It was the resurrection of a car which could well have stayed in the ‘great garage in the sky’ forever.

Back down to earth, what’s the revived Volkswagen Golf Cabriolet like then? Well, it’s come back in better shape than ever. The two-door, four-seater, front-engined soft-top is fitted as standard with an electrically-powered fabric roof; this can be lowered in just 9.5 seconds including on the move at speeds up to 18 mph. No separate roof cover is needed, contributing to the very rapid opening time, and resulting in less boot space intrusion and meaning that, even with the roof down, there is 250 litres of available space.

The wheelbase is the same as the Golf hatchback which means there’s good interior space for you and your front seat passenger. An easy-entry function ensures good access to the back seats, although legroom in the rear is more restricted. Looks-wise, the grille and bonnet make the convertible model clearly identifiable as a Golf; however from the heavily raked windscreen rearward, it’s all new, giving a sportier appearance. At the tail end, new lights plus a deep crease in the boot lid are distinguishing design features. 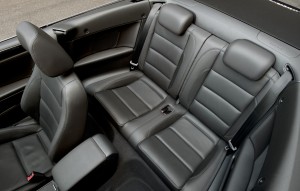 What can’t be seen from the outside are the differences that have been included under the skin. In changing the hatchback to a soft-top, modifications were made by Volkswagen to ensure that safety, comfort and refinement were not compromised in the cabriolet version. These include reinforced window frames and structural modifications to the underbody, side panels, cross-members and doors to endow the car with an extremely high level of torsional rigidity. An active rollover protection system is also employed, along with front and side head/thorax airbags and a whole host of other electronic stability and braking aids. 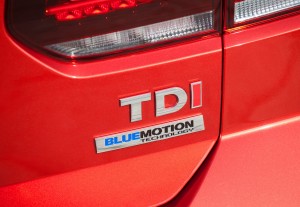 My test car, the SE BlueMotion Technology 2.0-litre TDI 140 PS 6spd manual was quick enough, super-economical and, like all Golfs, simply great fun to drive. The turbocharged 1968 cc oil-burner gives enough ‘oomph’ to make acceleration seem faster than the 0-62 mph in 9.9 seconds quoted, while ultra-direct steering, a slick gearbox and well damped switchgear create a more than satisfying driving experience. Luxury features such as duel zone climate control, cruise control, parking sensors and automatic lights also engender a feeling of wellbeing and make the cabin an agreeable place to be.

In fact, with total sales of around 1.42 million units, Volkswagen is one of the world’s most successful producers of convertibles. From 1979 to 2002, 684,000 Golf Cabriolets were sold around the globe. It’s hardly surprising then that the Germans brought the soft-top back to life. But what confuses me is why they killed it off in the first place. I guess it doesn’t matter now – the VW Golf Cabriolet is back, and that’s all that counts.

Now watch the commercial for the VW Golf Cabriolet: