TOYOTA’S 2012 AVENSIS is a work of genius – especially in Tourer guise.

True, not so long ago, the Avensis once looked bland and, more often than not, had a ‘minicab for hire’ sign glowing from its roof – but now the car is handsome enough for people to stop and ask what it is. I’ve had this happen a couple of times with the T Spirit Tourer 2.2 D-CAT Auto model I drove. In fact one guy asked if it was a Lexus. ’Not far off’, I said. He was utterly amazed the car was a Toyota.

You see, the pronounced snout, the wrap-around headlights with integrated LED strips, combined with the car’s long, sleek body, make the Avensis Tourer one of the best looking estate cars on the market. From a purely aesthetic point of view, little touches such as privacy glass at the rear and the sort of alloy wheels you’d expect to buy as an optional extra are the icing on the cake. 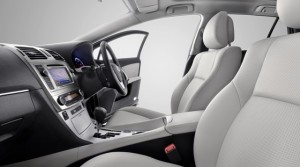 Inside, the car is a match for many German executive motors. Soft touch materials cover the cabin, complemented with a nickel and wood effect centre console. A leather steering wheel, air conditioning, and automatic handbrake add another tier of quality, but Toyota’s Touch and Go integrated multimedia and navigation system is the showpiece of the interior. A standard feature of the top-of-the-range T Spirit model, Toyota Touch and Go Plus, broadens the functionality and versatility of the company’s usual system to include access to email, advanced traffic data, improved mapping, and voice recognition. 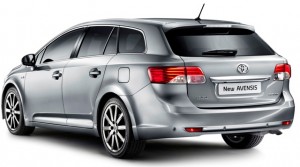 On the road, the 2012 Avensis is one of the best commuting machines out there. It glides over bumps and eats up motorway miles without any effort at all. The dials and switches on the dash and on the steering wheel are very clear and simple to use, and the automatic gearbox, which was fitted to my test model, is smooth and a doddle to operate. The seating position is high, but comfort is top notch, helped by an exceptionally effective electric lumbar support system. Okay, the light steering can be a little less than successful at communicating what’s going on beneath the wheels, but it makes driving easy – especially when weaving through traffic or parking. And when it comes to loading up, the boot is massive (543 litres). It’s low, wide and long, with lots of space for anything from exhibition display boards to the family’s holiday luggage.

The Avensis, which is built exclusively at Toyota’s UK factory in Burnaston, Derbyshire, is so good that it is now exported to Japan. ‘What?’ I hear you ask, ‘Isn’t it Japanese anyway?’ Well, yes, but demand for European styling and engineering from Japanese customers has prompted Toyota’s decision to introduce the Avensis to the ‘home’ market. In fact, the launch of the third-generation Avensis to the native land of Toyota simply strengthens the performance of the UK plant, which already ships the model to 47 countries worldwide.

So, despite starting off as boring back in 1997, the Avensis is proving to be one of the most popular cars around. By the end of 2010, more than 1.8 million Avensis vehicles had been built – all at Burnaston. And now, with a major new look and extensive changes for 2012, the Toyota Avensis Tourer has propelled itself to the top of its class to be best for value. New, more efficient engines not only mean lower emissions, but better fuel consumption – and are a key improvement over the older model. It explains why the Toyota Avensis Tourer was named as winner in the Family Estate category in the Parkers Cost of Motoring New Car Awards, 2012. It’s certainly a car worth considering for business or for family motoring. It’s a cracker – I promise you.