Chris Evans revs up for Car-Fest 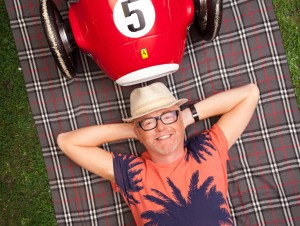 WITH JUST weeks to go, the final preparations for the eagerly anticipated CarFest South and CarFest North are taking place.

The two CarFest weekends – to be staged at Laverstoke Park Farm in Hampshire (25-26 August) and Cholmondeley Castle in Cheshire (8-9 September) – are the living reality of a dream conjured up by media personality Chris Evans. His vision was to host his very own perfect ‘family festival’ brimming with all the things he loves – great cars, food and music – and at the same time raise vital funds for BBC Children in Need.

The story goes that having given up bread for Lent, Evans invented CarFest to keep himself away from the bread bin!

With the seed sown, he announced the first CarFest to his millions of early morning listeners to his breakfast show on BBC Radio 2. Though preliminary details were somewhat slight beyond some jaw-dropping cars, mouth-watering food and foot-tapping live music, the concept was an immediate success with all 20,000 tickets to the Laverstoke Park Farm event selling out within minutes of being put on sale.

Fuelled by this instant sell-out and also keen to satisfy the obvious demand from all over the country, Evans announced a second CarFest to be held a fortnight later at Cholmondeley Castle. Once again all 20,000 tickets were snapped up within hours of the box office opening, though a recent licence extension has now made a few more tickets available.

“It’s getting quite scary,” admitted Evans. “I had this crazy CarFest idea back in March and since then everything has gone completely bonkers. We’ve sold thousands and thousands of tickets, launched a second event in the north, been overwhelmed with offers for super-duper cars, some of my favourite live bands plus fabulous food and now the clocks are ticking down. Boy, from a personal and selfish point of view, this really is going to be good. It’s my kind of festival – I’m just hoping everyone else agrees with me, the sun shines and that we raise humongous amounts of money for BBC Children in Need as, after all, that’s what all this fantastic fun is really all about.”

Both Laverstoke Park Farm and Cholmondeley Castle already have strong automotive links. The former is renowned for its organic food and is owned by 1979 F1 World Champion Jody Scheckter while the latter is famous in motoring circles as the glorious setting of the annual Pageant of Power. Now their respective reputations will be furthered as the country’s first two venues to host one of Evans’ dazzling CarFests.

In just four months, the DJ’s fantasy has been transformed into two living extravaganzas boasting stunning displays of contemporary and classic cars for visitors to admire, live music from top bands to dance to, superb food to savour plus a wide selection of camping and ‘glamping’ options as well as lots of other activities to entertain everyone around the two CarFest festival sites.

Living up to its title, a spectacular array of cars is right at the heart of both CarFest events. And that’s no surprise as Chris Evans is a confirmed fan of fast cars and owns one of the world’s finest collections of Ferraris.

Taking its lead from Evans’ established ‘Magnificent Seven’ drive and dine extravaganza which allows members of the public to experience some of his fabulous Ferraris in exchange for major donations to BBC Children in Need, groups of invited cars will roar up the respective driveways of Laverstoke Park and Cholmondeley Castle in clusters of seven.

In all there are already a large number of confirmed Magnificent Seven categories of performing cars for festival-goers north and south to relish. They are:

Adding to the strong automotive hub and keeping to the Magnificent Seven theme will be huge car galleries organised by car clubs and enthusiasts. The target is for seven static galleries, each including seven different marques displaying seven of their finest creations – that all adds up to an amazing showcase of no fewer than 343 of the world’s most exciting and intriguing cars.

Moreover for those inspired to join the growing classic car movement, lots of desirable and affordable models will be coming under the hammer at daily auctions run by Silverstone Auctions.

The magical mix of Magnificent Sevens produces a fantastic kaleidoscope of motoring and motor sport history… but that’s only the start of the mouth-watering CarFest feast which boasts many more tasty treats for all ages.

At the start of the CarFest project Evans said: “As twilight falls and the fat August sun slips behind a city of tents, it’s time to plug in the guitars. Rock ’n’ roll my friends – nothing too crazy, but top quality and a fun time for mums, dads and kids alike.”

As a result show-goers are encouraged to bring their dancing shoes, their air guitars and their fine voices and get ready to party on both Saturday and Sunday evenings. Chris Evans himself will host the stage, introduce the bands and will occasionally take the turntables for some good old-fashioned DJ action.

To get everyone in the right party mood, top tribute bands including the Counterfeit Stones, Ultimate Eagles and Bootleg Beatles kick off the live music action with Texas, Razorlight, The Magic Numbers and Merrymouth (featuring members of Ocean Colour Scene) heading the bill at both CarFest festivals. The Feeling join the Laverstoke line-up while Paloma Faith and The Proclaimers are on the Cholmondeley bill.

CarFest sets out to be a gourmet’s delight with quality food for all tastes and ages.

More than just a CarFest venue, Laverstoke Park has an enviable reputation for its organic/biodynamic farm producing the best-tasting, healthiest food, without compromise… and those attending both CarFest South and CarFest North will be offered a wide range of Laverstoke’s finest from early morning breakfast with organic, nitrate-free, bacon rolls to a full supper at the end of each day.

Along a similar theme, a special Britain’s Best Pavilion will house the very finest food and drink that Britain has to offer as chosen by a panel of food experts. Products on offer include breads, cheeses, meats, cakes, jams and much more.

Adding a little more spice plus a slice of competition to the culinary content, 50 pie makers and 50 cake makers will go head-to-head in a unique Cakes vs Pies contest. Initial judging will take place on Saturday with Mary Berry and Paul Hollywood selecting the ultimate champion on Sunday. With losing pies and cakes being made available for visitors to buy no one is going hungry!

Adding to the festival atmosphere and guaranteeing fun for all the family, the two CarFest events offer a range of activities for all ages, from dare-devil displays to face painting.

Keeping the whole family entertained will be a wide variety of air displays, arena shows, kids zones and more. Those performing include the RAF Hot Air Balloons, Dancing JCB Diggers, Trailstar Motorcycle Trial Riders, Segway Racing, The Blades aerial display team, a firework display from Fuse Fireworks plus jousting from the The Knights of the Damned

For the foodies Laverstoke Park Farm will be running a range of workshops including ice cream making, bread making, butter churning and biscuit decorating. It will also host a DIY BBQ Zone where visitors can cook food they’ve bought from around the show and get expert advice from staff.

With so much to experience, a large number of CarFest visitors have purchased full weekend tickets and are taking full advantage of the large number of camping options being offered at both events. These range from simple overnight tent pitches to luxurious pop-up hotels for those seeking the ultimate VIP experience.

Right from the outset, Chris Evans knew that he wanted CarFest to raise vital funds for BBC Children in Need. A minimum of one third of the price of each ticket plus any further profits from the running of CarFest will benefit the charity.

A limited number of VIP tickets are still available for CarFest South while an extended licence has enabled the organisers to offer some additional day and weekend tickets for CarFest North. For more information visit: www.CarFest.org.