THE MAZDA3 1.6 oil-burner is a perfectly adequate hatchback. It pulls more powerfully than you might expect, and the drive is actually quite engaging.

On start up, the diesel engine sounds a little harsh but, on the move, the engine noise doesn’t overly intrude on any conversation you might be having with your passengers. The clutch is surprisingly heavy for a mid-sized family hatch and the ride is too firm at times but, on the plus side, the Mazda3 holds the road well and the car cruises very nicely on motorways.

The Mazda3 is big enough for a family of four. Your adult passengers won’t be stretching their legs out in the back, but they won’t be doing that in any medium sized car. Access to the rear is particularly good in the five door version of the 3; if you’re a parent of young children, you’ll notice that the doors open wide enough for you to lean in and secure your offspring in their seats easily. Another tick in the box for this Japanese-made car is the load area – the boot is deep and wide allowing, for example, a folded pushchair to be lifted in without any hassle.

Aesthetically, the Mazda3 is appealing; in fact, it has had a makeover for 2012, giving it a more muscular, aerodynamic, look. It has a new face, a different rear bumper and it features up-to-the-minute ‘twist-spoke’ alloy wheels. Inside, there are fresh materials and Mazda’s designers have replaced the previous silver colour of the lower dashboard console with black. Behind the wheel, the dials and controls have been ringed in satin-polish silver, making them clearer to see.

As well as general improvements to its appearance, and little tweaks here and there to make it even more driver friendly, the Mazda3’s fuel economy has been enhanced. If you’re careful, you can now get a maximum of 65.7 mpg out of the hatchback. This is impressive – and largely due to the new model’s refined aerodynamics. 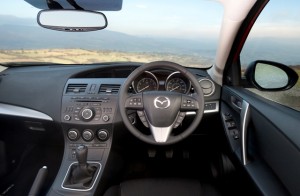 The TS2 model comes well equipped with front fog lights, dusk-sensing lights and rain-sensing front wipers. It also has Integrated Bluetooth, a heated windscreen and cruise control. But you won’t get much change out of £20,000 if you want a brand new Mazda3 with this level of kit and a turbo diesel under the bonnet. The 1.6D TS2 will set you back £18,295. Still, in today’s market, that’s actually pretty competitive.