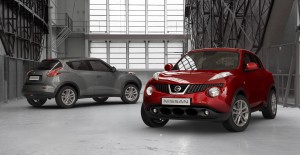 I ADMIRE NISSAN for being different. It stands out from the crowd at the moment because it has dared to produce a car which is definitely like Marmite; you either love the Juke or you hate it.

And it is certainly an odd vehicle. At first glance, it doesn’t appear fast, but it is; it doesn’t give the impression of being comfortable, but it is. Do you see where I’m going here?

As I write this I still can’t make my mind up on whether I like the car on not. It is fun to drive – mainly because it zips away from a standing start easily, albeit in a highly-strung manner. On the other hand, I don’t like the lack of load space because, as a dad of two, I need a boot which is bigger than the Juke’s. That said, if you’re going away on holiday or business, it is adequate for your flight case and your partner’s travel case – as long as the luggage is small and rectangular.

The Juke is a mixed bag really. The two-wheel-drive model I tested could easily work for someone who wants a slightly zany company car to stick out from the convoy of German executive models on the daily commute. It is also an ideal vehicle for pure leisure; if you’re into towing, this little motor will pull up to 1200kg (braked). And there is also a four-wheel-drive version available which will, in wintry or muddy rural surroundings, give plenty of extra grip. But, whatever the reason for driving it, you’ll find the car is definitely one that draws looks. 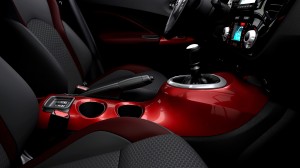 So what is the Juke all about? Well, the idea is that it brings all the benefits of the popular Qashqai into a more compact package. It is what’s known as a ‘Crossover’ vehicle because Nissan has merged the rugged appeal of an SUV with the emotive appeal of a sports car. As the fourth such model in Nissan’s European range, the car injects some much-needed dynamism into the small car segment, offering British motorists an alternative to the traditional, uninspiring hatchback.

It seems that innovation is central to every part of the Juke’s design and, inside, you are greeted with the ‘Nissan Dynamic Control System’. This is a central command and display module like no other; it allows you to alter dynamic drive settings as well as easily control functions such as climate control. What’s more, the system adopts different displays, colours and functions depending on the mode selected. It all adds to the fun of being behind the wheel of this nonconformist, yet very capable, car. 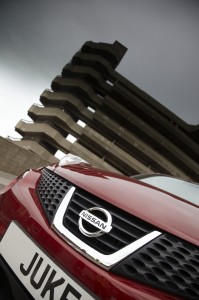 The Juke on test here, in flagship ‘Tekna’ trim, has enough room for four and, with its 1.6 turbo and 188 horses under the bonnet, it’ll undoubtedly set all occupants’ pulses racing. With a 0-62mph sprint of 8.0seconds and a top speed of 134mph you can feel that Nissan meant this car to have a sporting, ‘hot-hatch’ character. It does feel slightly skittish and edgy but that just adds to the entertainment. You might think then that this petrol-powered version of the Juke is a juice-guzzler. Well, surprisingly, it’s not – it returns a very reasonable 40.9mpg on the combined cycle with CO2 emissions of 159g/km.

The Juke is manufactured alongside the Qashqai, Qashqai+2 and Note at Nissan’s high-tech manufacturing facility in Sunderland. The 1.6 DIG-T Tekna will set you back £18,095 on the road.