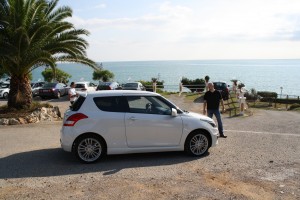 The car, which will be available in the UK in the New Year, is expected to sell for around £14,500 and, let me tell you, you will get a lot for your money if a super-mini is the kind of motor that toots your horn.

I got to drive the Swift Sport around Barcelona as part of the Japanese company’s efforts to promote its latest model to the media. I was suitably impressed; the car has more control, it’s more fun and it has lower emissions than its predecessor. But the best thing about it is that a sixth gear has been added to a gearbox which has been woefully lacking in the past.

On the outside, the Swift Sport looks great from the rear. A wind diffuser and twin tailpipes give it an appearance similar to a Renault Clio Sport. The front is less extreme, but from the side the car has a low-slung stance which immediately distinguishes it from a standard Swift. 17 inch alloy wheels also add to the chunkier, more potent, image.

Behind the wheel, the new model is quicker off the mark than the last one due to an increase in power output, which has risen from 121bhp to 134bhp. The sixth gear also helps to improve acceleration and gives the speedy Swift a more sporty gear change. The leather clad steering wheel and the front sports seats add to the athletic feel of the Japanese car. The seats grip you when the Suzuki is flung around corners (and there were plenty of left and right-handers on the bendy hills rising above beautiful Barcelona). Don’t get me wrong, the Swift Sport is never going to give you an adrenaline overdose – but it’s fun enough to stand up to fast little numbers like the Citroen DS3, the Fiat Punto Evo and the MINI Cooper.

With seven airbags, Suzuki’s fresh pocket-rocket is safe as well as sprightly. It offers the same control and peace of mind as the standard Swift, which earned a five-star rating in the European New Car Assessment Programme (NCAP) and the highest overall points scored amongst other new cars tested at the time. Standard safety equipment also includes anti-lock braking with electronic braking-force distribution, and an Electronic Stability Programme (ESP).

Of course, no super-mini is ever going to have a massive boot. But the Swift Sport doesn’t really have much of a load area at all – it’s more like a rectangular slot. It’s big enough to fit a couple of biggish bags in, and, if you’re a parent with a penchant for small, quick, Japanese cars, then the tiniest buggy in the world might just about squeeze in as well. In spite of this, the rear seats are big enough to install two child seats and without them two adults can fit in the back, but legroom is limited.

Suzuki expects its new offering to appeal to motorists in their early 30s, and it anticipates a 60/40 split in favour of men buying the car – so there’s always a chance that parents who are looking for a bit of a fun drive could go for this motor. I suspect that many won’t be looking at the Swift Sport as a practical option though and it’ll be the single girls and guys with a limited budget and a need for speed who will be heading in their droves to Suzuki dealerships in 2012.