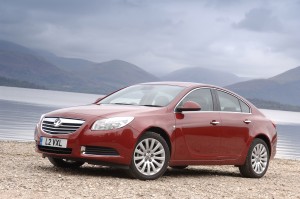 SINCE THE INSIGNIA hit UK showrooms in 2009 it has been an unquestionable sales success for Vauxhall.

Decent looks, the choice of all-wheel-drive models and a range of new technology has lifted its appeal to not only fleet customers, but also to retail buyers. And with many awards now behind it – including the coveted European Car of the Year – it’s no surprise that UK buyers made it the best-selling mid-size car soon after its launch.

To further boost the Insignia’s competitive position, Vauxhall has now combined its Adaptive 4×4 system, which was previously only available with the 2.0 and 2.8 litre petrol engines, with the 2.0 litre 160PS CDTi diesel engine. A rare combination in this market sector, the Insignia CDTi 4×4 hit British showrooms last year and has now added to Vauxhall’s reputation for technological innovation still further.

The 4×4 system fitted to the SRi 2.0CDTi 16v hatchback version, on test here, combines the best characteristics of conventional mechanical and hydraulic all-wheel drive systems, and means that the driven wheels don’t have to spin before corrective measures kick in. This allows the car to still maintain safe traction even if three wheels are on sand or mud and only one rear wheel can find grip. In bad weather or on treacherous roads, the advanced chassis systems are designed to recognise and avoid danger early enough to support you in tricky situations, without detracting from the car’s dynamic appeal.

The 4×4 technology not only helps out in critical safety situations, it also detects when all-wheel-drive is not required, such as on a dry, clear motorway, and reverts to front-wheel-drive to reduce friction loss and save fuel. It also means that this Insignia variant is perfect for hauling trailers or for anyone living in regions with inclement weather who has to travel regardless of the rain or snow. Indeed, if you are a big towing fan, Vauxhall offers trailer stability assist, which helps protect against those dreaded pendulum swings.

Inside, the Insignia incorporates many high-quality materials which blend together to form a classy cabin. The effect is an interior which is not far off the refinement levels found in some German executive marques. The only downside I could find on my test car was that in cold weather the steering wheel squeaked when turned. But the noise stopped when the temperature increased. This appeared to be caused by plastic materials rubbing on each other and might just be a glitch that my particular test car had.

Another example of how Vauxhall has raised the bar is through its FlexRide technology. This comes as standard with the 4×4 chassis system and gives you the choice between three driving styles. In addition to the standard mode you can either opt for a comfort-oriented “Tour” or a “Sport” setting. The Sport mode makes the Insignia driving experience more active, changing the set-up of interlinked functions such as the steering, throttle control and even the ambient lighting of the dashboard from a soft white to a fierce red.

The only thing that might put you off the Vauxhall is its slightly noisy diesel engine. It’s not overly raucous, but it’s not as hushed as some of the executive oil-burners from Germany or Japan. That aside, the large hatchback seems to have it all: its all-wheel drive system is one of the most sophisticated on the market, it has a good cabin, it’s well designed, has a massive boot and drives well. On top of all that, the Insignia SRi 2.0CDTi 16v 4×4 certainly looks credible enough for  business use, it’ll get you to meetings even in the worst weather, but it will also double up as a large, safe, family car capable of towing up to 1600 kg. 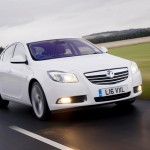 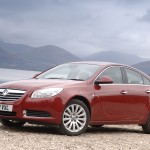 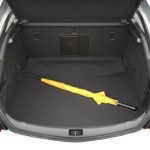 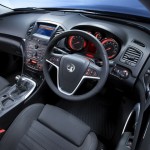