THE 64TH International Motor Show in Frankfurt was dazzling as usual, and there were more than just a few concept cars on show. Many of these high-tech machines could well go into production, so I took at look at a few show-stoppers that might find themselves parked on your driveway one day. 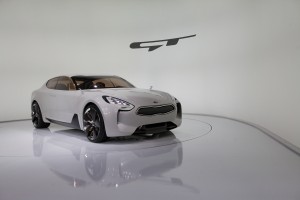 Kia might once have been known for making budget cars, but the South Korean company has taken advantage of the economic climate to lever itself into a position of power. The popularity of cheap new cars with huge warranties and excellent customer service exploded in Europe a few years ago, so Kia, having gained the loyalty of consumers in this part of the world, has upped its game recently to produce cars that look anything but cut-price.

Kia’s confidence in its cars has grown so much that it has designed what appears to be the mother of all sporty executive concept cars – the GT. Powerful, dynamic and forward-looking, the four-door saloon with rear-wheel drive – a Kia first – marries sleek and muscular proportions with a sophisticated and elegant four-seater cockpit.

Under the bonnet, the Kia GT houses a V6, 3.3-litre T-GDI petrol engine mated to an eight-speed automatic transmission. The car has 390 horses and up to 393lb/ft of pulling power.

If it ever gets made then this will be a car that business leaders will want to possess. It’s different, it’s knee wobblingly attractive – and, yes, it’s a Kia. On seeing the badge, many people will think they’re hallucinating, but this East Asian car maker has only just begun its shift up-market. Expect more from Kia in years to come. Expect a lot more. 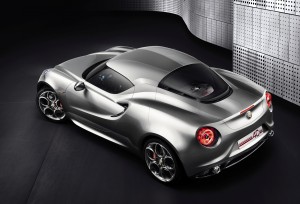 Alfa Romeo’s latest concept car showcases the formula of a two-seater, rear-wheel drive coupé with a central engine, a length of approximately 4 metres and a wheelbase of less than 2.4 metres. These dimensions on the one hand emphasise the Alfa 4C’s compact attributes, whilst on the other accentuate its agility.

The car uses materials such as carbon and aluminium – and technology from Alfa Romeo models currently on sale: the renowned 1750 turbo petrol engine with direct injection, twin clutch transmission; and all the best of Alfa’s DNA technology, including the Alfa dynamic control selector.

The Alfa 4C concept was exhibited at Frankfurt in a new and exclusive ‘fluid metal’ colour that dynamically enhances the smooth and sinuous lines of the car. Vehicle weight is confirmed at around 850kg, the engine delivering more than 200bhp and a power to weight ratio less than 4kg per HP – traits worthy of a true ‘supercar’. 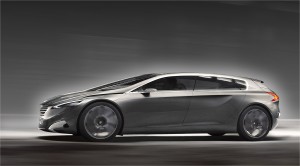 The HX1 is a vehicle that is pure in style; up market and exuding dynamism and exclusivity. Its sleek, elegant and fluid lines seem to have been tailored by the wind itself. They subtly underline the athletic, even muscular, character of the vehicle.

Peugeot’s designers have taken aerodynamics to the extreme with HX1. When stationary and at low speeds the HX1’s styling makes it appear sculpted from a solid form as the moving parts have been adapted to optimise air flow and to enhance the car’s environmental performance. The seven ‘spokes’ in each wheel rim spike, fashioned like a turbine blade, open to create a flat disc surface. At the same time, a spoiler and two side skirts located at the top of the tailgate are deployed above 62.1mph. When moving, the HX1 therefore adapts itself ‘physically’ to its environment.

Under the bonnet of the HX1 the engine is a 204bhp, 2.2 litre HDi diesel, linked to an automatic 6-speed gearbox; the same powertrain as that used on the 508’s range-topping GT version. Coupled with a 95bhp electric motor, the combined output can develop a potential 299 horses. 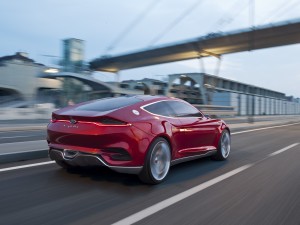 The Ford Evos has been conceived as a dramatic fastback concept, combining a striking new profile with innovative proportions. Attention-grabbing lines conceal a unique new format, with a four-door, four-seat layout which knits dynamic appearance with surprising practicality.

With the length of a typical saloon car, but with width of a higher executive vehicle, the Ford Evos concept has a powerful, sporting stance. The forward position of the cowl, the strongly rounded front screen and the A-pillars set further to the rear create the impression of a classic GT car, but with a very contemporary feel.

Reflecting the fun-to-drive spirit of its exterior design, the interior of the Ford Evos concept is built around the driver. A stylish and innovative cockpit promises new levels of driving pleasure and driver interaction.

Completing the vision for the Ford Evos Concept is a state-of-the-art lithium-ion plug-in hybrid powertrain providing the same next-generation performance and fuel economy as the Ford C-MAX Energi, scheduled for introduction in Europe in 2013.