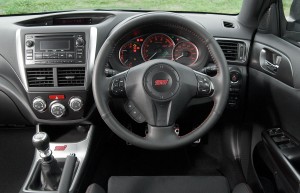 THE SUBARU WRX STI is like nothing else on the road. It combines power with precision and rally-bred performance with everyday practicality, putting it in a class of its own.

Introduced at the end of last year, the 2011 Subaru WRX STi is a substantial upgrade to the high performance version of the Impreza. And it is a welcome comeback, because it sees a four-door saloon rejoin the range after a three-year absence from the UK.

The major difference between Subaru and other brands begins with the balance and control that comes from its permanent Symmetrical All-Wheel Drive and Boxer engine. But, unlike most performance cars, the Japanese motor manufacturer’s WRX STI doesn’t just excite while in motion. Its styling, both inside and out, is geared towards making petrol-heads drool. New bumpers, enlarged rear quarter panels and a lower ride height give the car a more muscular presence than ever before.

Inside, the quality of the cabin materials has been upgraded, and the driver and passenger are assured of a secure and comfortable seating position thanks to the introduction of all-new RECARO bucket seats. Behind the wheel, your feet settle easily onto the drilled aluminium pedals and you instantly feel at one with the car. The thick, leather-wrapped steering wheel gives you easy access to audio switches and cruise control buttons, meaning you can concentrate on the road ahead without taking your hands off the wheel. The only thing left is a quick press of the push-button engine starter to bring the vehicle to life.

Aficionados of Subaru performance motors will love the sound the car makes when it starts up; a new exhaust system, with a bigger centre muffler and larger diameter piping, enhances the engine’s iconic boxer ‘burble’.  And at the core of the WRX STI beats the heart of a champion — the turbocharged 2.5-litre Subaru Boxer engine. The lump propels the car from 0-62mph in just 5.2 seconds and the smooth 6-speed manual transmission lets you savour every sweep of the glowing red rev counter. As you match revs to extract the most of the engine’s charitable torque curve, you feel the 158mph performance potential of the WRX STI firmly within your grasp.

But the fun isn’t all about being first off the lights because, unlike most cars, with the WRX STI you control the set up. The Subaru features a default setting of 41 / 59 per cent front / rear torque distribution for optimum balance, and you can adjust this while on the move using the four-mode (Driver’s Control Centre Differential) system. The WRX STI also incorporates Multi-Mode VDC (Vehicle Dynamics Control) – Subaru’s version of electronic stability control (ESC), allowing you to modify the point of intervention of this electronic driver aid to suit your own tastes. Subaru has further tuned its three-mode SI-Drive (Subaru Intelligent Drive) system, which can be used to adjust the engine’s characteristics to best suit a variety of driving conditions.

You may have noticed during this review that there has been very little mention of the name ‘Impreza’. Well, there’s a reason for that – it seems those six letters (WRX STI) are so synonymous with automotive exhilaration that the moniker has been dropped and the new model is now simply known as the ‘Subaru WRX STI’. But whatever it’s called, the car will continue to be a superstar – certainly in the hearts and minds of speedy Subaru purists.